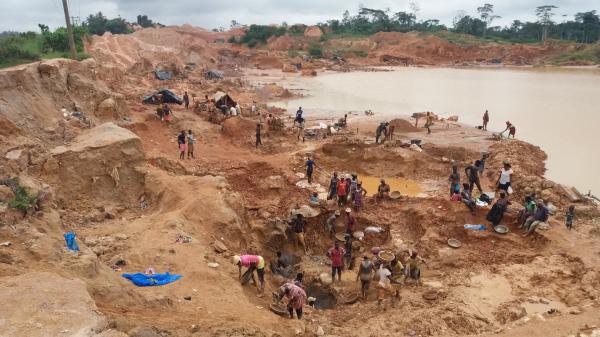 Chinese company to build iron ore mine, steel plant from May

A week before schools open, after a long Covid-19 induced sabbatical, pupils at Gwangwava Secondary School in Rushinga are returning to a school ravaged by illegal miners who left a trail of destruction in search of alluvial gold.

The sporting facilities, such as playing grounds, are now littered with huge pits and holes as the illegal miners did not reclaim the defaced land when they failed to find the gold.

Now with schools set to open next week, the villagers have resolved to refill the pits for the benefit of their children and the community which uses the learning institution for social functions.

When The Herald visited the school last Friday, some parents were at the site with scotch-carts, shovels and hoes, busy refilling the pits in preparation of their children who return on the 15th and the 22nd of this month.

In an interview, headman Gwangwava said the crisis started last year around February when the Chidyamudungwe family, which shares a boundary with the school started claiming part of the school premises as their land.

“The problem started last year before I was installed as the headman. It started with Chidyamudungwe when they discovered gold and scores of people joined in. When it started affecting the school, we alerted authorities,” said headman Gwangwava.

After failing to find gold in the school grounds, the daring illegal miners turned to a goat breeding area at the school, again leaving a trail of destruction.

“Over 300 people would converge at the school grounds during the night to search for gold. When we engaged the police only two people were arrested,” he said.

“This school was granted a boarding school status and all the affected areas is meant for infrastructure development. We have engaged neighbourhood watch teams and well-wishers from villages to provide security at the school,” headman Gwangwava said.

Ward 14 Councillor, Shake Chibundu, said the community is pushing to rehabilitate the grounds manually before schools reopen but would have preferred to have graders.

“Our target is to refill the track but the process is a challenge because sand was removed by the miners who were into alluvial mining, right now there is need to fence the ground to keep them away.

“From our assessment, these people are not from this ward and I engaged fellow councillors in an attempt to end this problem. There was no positive response and I will raise the issue again during a full council meeting.

“We need a grader and fuel to level the ground. We are trying manually but it is a difficult process. If it was not for these initiatives the panners could have invaded classrooms by now.”

One of the parents, Owen Kabvura said his son Obrian, who is in Form 3, is an athlete and would be affected by the state of the school.

“We want the law to take its course. If these people are interested in mining they must take appropriate steps with relevant authorities and be allocated designated places,” he said.

Teenager (16) dies in mine shaft collapse

Chiratidzo Kararira, who is the mother to Wadzani Chikadaga a Form 4 learner at the school, said she is not sure if the rehabilitation process will be successful because after filling up the pits the illegal miners are coming back again under cover of the night.

Member of Parliament for Rushinga Hon Tendai Nyabani said the police and Environmental Management Authority (EMA) should do more to enforce the law.

“People caught panning at this school were charged for contravening Covid-19 regulations. EMA issued a ticket recently when the damage was extensive. The solution to this problem is to set an example on those caught on the wrong side of the law.

“Six wards are benefiting from this school and these include ward 11, 12, 13, 14, 15 and 24. We only have two boarding schools and learners travel long distances to school. We have challenges in mobile phone network coverage and with the advent of online learning we are in need of mobile network boosters.”

Rushinga RDC chief executive officer Mr Paradzai Munyede said the illegal mining activities are now a threat to the goat breeding project funded by European Union to improve the breeds in the community.

“The project is a big investment and we are having a review meeting next week on this issue. Gwangwava High School is one of the oldest and biggest school with a high pass rate in the district and learners come from as far as Uzumba-Maramba,” he said.