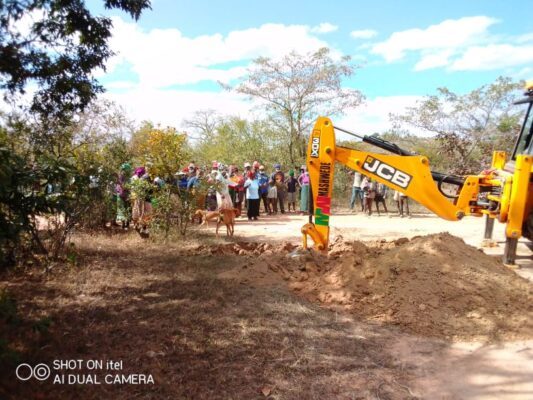 Hardline villagers in the Sese area of Masvingo have revived their turf war with Rio Zim’s Murowa Diamond Mining Company after digging several trenches along a road in Mashamhanda village in yet another bid to block the miner from accessing its drilling site.

Relations between the two parties had appeared to thaw after Murowa undertook to introduce a bursary scheme for 100 underprivileged children in Sese and also provide fuel for road rehabilitation and drilling of boreholes.

Murowa is exploring for diamonds in Sese to establish whether kimberlites in the area are diamondiferous and contain commercially exploitable reserves.

Villagers have been pushing for the miner to leave the area and are adamant that instead of diamond mining, they would be better off venturing into irrigation farming using water from the nearby Tugwi-Mukosi Dam.

The latest move by villagers to dig at least six new trenches to block the miner from accessing a drilling point in Mashamhanda village will likely escalate tensions again.

Murowa is now being forced to use a longer route to access the drilling point with villagers vowing to continue frustrating the miner.

The route now being used by Murowa passes through an area where one of the contractors rehabilitating the Harare-Beitbridge highway gets its gravel and villagers cannot block that route without risking arrest.

Mr Musiiwa rubbished reports of a recent agreement with Murowa following arbitration by a joint committee saying villagers wanted the diamond miner off their area.

He claimed that Murowa was not sincere in its dealings with them.

“Angry villagers want Murowa to leave and the six new trenches were dug sought to make it difficult if not impossible for the miner to access their drilling point in Mashamhanda village.”

“I don’t see an agreement between us and Murowa anytime soon because we have reached a point of no return. We want them to leave.

“We feel it would be better and more sustainable if we venture into irrigation farming using Tugwi-Mukosi water now that we hear projects around the dam are set to start,” said Mr Musiiwa.

Responding to promises of employment and socio-economic transformation in and around Sese if commercially exploitable diamonds were found in the area, Mr Musiiwa said Murowa’s operations were murky.

“We no longer trust these people anymore because they are not open. In fact they were never open from the start and now they are in their third year doing exploration yet at first they said at the end of 18 months they would have made conclusions.

“We also challenge them to update the nation on progress they have made within the three years they have been here.”

He said a bursary for only 100 school children by such as big company already mining gemstones in neighbouring Zvishavane was a mockery to the people of Chivi.

“Even by merely looking at the promises Murowa has made one can see that these people are not sincere. What is the cost of educating 100 school children in a rural area?

“They cannot even build their own camp which makes it hard for us to believe their sincerity so we want them to leave,” said Mr Musiiwa.

Chivi district development coordinator Mr Innocent Matingwina recently said more meetings would be held between the warring parties as a joint committee had been formed at the behest of Government and was now operational.

Murowa, through its vice president responsible for Human Resources and Administration,
Mr Islam Chipango, has accused the villagers of trying to derail government’s plans to create aUS$12 billion mining industry by 2023.

Mr Chipango recently said while the exploration in Sese had to date been inconclusive, the company’s continued drilling of more points indicated its confidence in the existence of a commercially exploitable resource.

Murowa, Alrosa, Anjin and ZCDC are the only four firms allowed to mine gems in Zimbabwe under the country’s diamond policy.