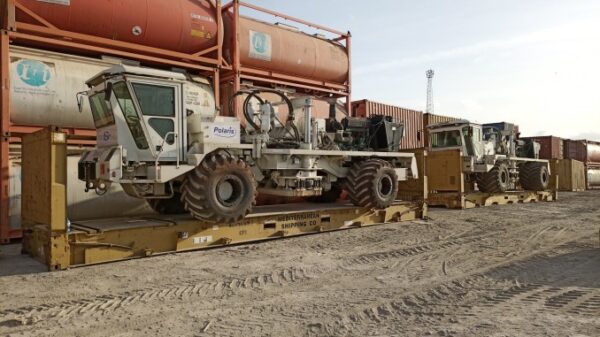 The camp for the detailed seismic survey of the potential oil and gas field in Muzarabani has now been set up by Geo Associates, a subsidiary of Australian listed Invictus Energy, at Gutsa and the first 120 local people have been hired while the equipment, now in Durban, is expected in Zimbabwe early next month.

Just bringing the equipment to Gutsa has seen the local roads repaired and upgraded so the massive low-loaders can make the trip and other simple infrastructure, like a borehole and a staff clinic, are expected to give early benefits to the community.

The Muzarabani community is excited at the opportunities opening, after years of talk.

While this initial stage is centred on a detailed seismic survey to map more precisely the underlying hard-rock layers deformed into domes over millions of years so as to choose the best site for a test well, benefits will be flowing into the community.

Energy and Power Development Minister Zhemu Soda is the Muzarabani North legislator, and so can appreciate both the national benefits and the local benefits fairly precisely.

The agreements between the Government and Invictus Energy have already been drawn up and signed off, which allows the project to kick off.

These will help the finalisation of the enabling Hydrocarbon Policy by the Ministry of Energy and Power Development, he said, but noted: The policy will be effective when we have the products. At the moment the engagement between the Government and Invictus
Energy allows the project to kick off.

“Geo Associates, which was formed to do the explorations, are already on the ground. They have sited their camp and done initial employment for a few people.

The company is in the process of bringing up their equipment which is now in Durban.”

Minister Soda said the equipment would be in the country early next month, and would be serviced before deployment in Muzarabani.

But these developments gave the community confidence that the project is progressing.

“In all fairness, no one would inquire about costs if this project was not real. This is evidence that this project is real and they have discovered something on the ground.

“There is excitement and acceptance of the project by the community in terms of the jobs and value chains that this project will create.

“With people employed and earning regular salaries, it is going to increase the level of business.

“There is acceptance of the project in the community as much as people may have thought that the development might affect them.

“People have embraced the project after realising that the benefits outweigh their fears,”

There have already been wide consultations involving chiefs, village heads and the political leadership.

“Minister Soda said all the developments indicate that the Second Republic was determined to develop the country.

President Mnangagwa wanted all communities to benefit from their natural endowments so as to uplift the people’s living standards.

“Previously there was no will to progress with such projects but now there is that commitment,” he said.

Muzarabani relies largely on cotton farming to bring money into the area, which does need development.

Hence the determination to make the most of the gas and oil exploration programme.

Ward 6 councillor, Alderman Martha Machingura, is the local councillor for the base camp at Gutsa. She said there was excitement in her area.

“Roads are being graded and construction materials are being ferried to the ground and the project is starting,” she said.

“We are optimistic that this project will result in the construction of a clinic in this ward.

“We are currently going to the Hwata Clinic which is 15km away.

“Secondly, we are in dire need of a cattle dip-tank, this is important because a dip-tank is a farmer’s first bank account.

“We are happy that our roads which are in a bad state due to the heavy rains experienced this farming season will be rehabilitated.

“We are appealing to the company to employ both women and men in the community to ensure equal opportunities,” said Alderman Machingura.

The late Chief Hwata’s son, Onias, said the community was overjoyed with the long-awaited project.

“The centre of the project is in Hwata village and more than 120 people have been employed so far.

“The company promised to drill boreholes and construct schools. They have started construction at their campsite.

“The youths are very excited, we are anticipating that the project will improve our standards of living.”