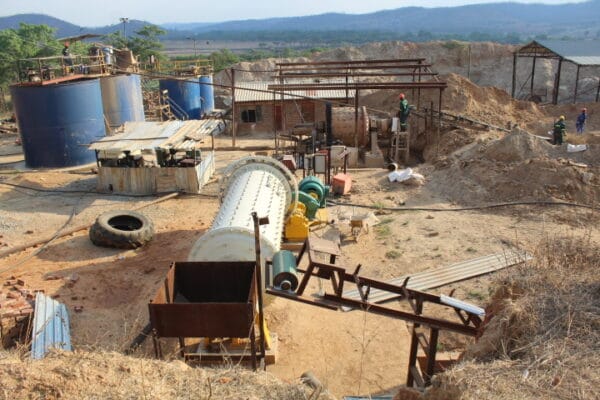 In terms of section 150 (1) every holder of a mining lease shall possess the following mining rights:

(a) which occurs within the vertical limits of the area covered by his or her lease.

It is a requirement in terms of section 135 (2) (a) for an applicant for a mining lease to furnish the mining commissioner particulars of the minerals which are being mined or to be mined in the area applied for.

The exclusive right within the vertical limits of the area covered by his or her mining lease any ore or deposit of any mineral discovered within such area after he or she has notified the mining commissioner.

This excludes the right to mine coal, mineral oil or natural gas.

Section 150 (2) confers the holder of a mining lease which includes any metal blocks in respect of which he gave details under section 135 (2) (c) the right to retain, in respect of such blocks, the extra-lateral rights which he or she held at the date of issue of the lease.

Extra-lateral means the right of following a reef on its dip beyond the vertical limits of the block.

Information requirements are specified in the section.

An application for a mining licence is considered by the Mining Affairs Board (MAB or the board) in terms of section 142. The MAB considers the following in determining an application:
Any determination on any objection made by the Administrative Court or the mining commissioner and any objection mentioned in section 139 (3). That the applicant’s financial status is such that he or she will be able to meet any payment due under section 344.

That mining operations on a substantial scale are likely to be conducted for a considerable period within the area applied for.
That no ground not open to prospecting is included in the area to which such approval would relate.

According to section 142 (6) the decision of the MAB to grant or refuse an application for a mining lease shall be final and without appeal.

This is done in terms of section 145. Where the MAB has approved an application for a mining lease, the board shall forthwith issue a mining lease in favour of the applicant in respect of the area approved and in accordance with the terms and conditions fixed by the
MAB itself.

Section 149 applies. A mining lease may not be transferred except to a person approved by the MAB after consultation with the owner of the ground covered by the lease. The board shall not approve the transfer to any person unless it is satisfied that the person is able to meet any payment which may become due under section 344.

No impeachment to title to mining lease

Section 153 of the Act provides for no impeachment of title to a mining lease on certain grounds.

Mining refining needs to be planned

Special mining leases are covered in Part IX, being sections 158-168 of the Act.

Section 159 applies. Where the holder of one or more contiguous mining locations intends to establish or develop a mine thereon, and:

Investment in the mine will be wholly or mainly in foreign currency and will exceed US$100 million, and the mine’s output is intended principally for export, he or she may apply in writing to the mining commissioner for a special mining lease in respect of a defined area within which his or her mining location or locations are situated.

According to section 159 (2) the MAB may permit a person to make an application for a special mining lease even though (notwithstanding that) either or both the criteria mentioned in section 159 (1)(a)-(b) will not be met, if the MAB considers that it is desirable in the interests of the development of Zimbabwe’s mineral resources to consider the grant of a special mining lease to the applicant. In such a situation the MAB considers:

Issue of a special mining lease

This is done in terms of section 163. The Minister (of Mines) shall forthwith issue a special mining lease if authorised by the President, in accordance with the MAB recommendations or other terms and conditions as the President may direct.

Disclaimer
This simplified article is for general information purposes only and does not constitute the writer’s professional advice. Laws may be subject to frequent changes. To be compliant, organisations and individuals are advised to consult adequately.

Godknows Hofisi, LLB(UNISA), B.Acc(UZ), CA(Z), MBA(EBS,UK) is a legal practitioner/conveyancer with a local law firm, chartered accountant, insolvency practitioner, registered tax accountant, consultant in deal structuring, business management and tax and is an experienced director including as chairperson. He writes in his personal capacity. He can be contacted on +263 772 246 900 or
[email protected]