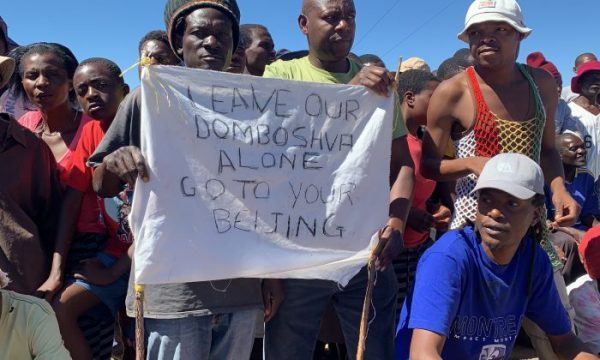 Chinese investors in Zimbabwe are infamous for ill-treating and undermining the rights of their co-workers or employees leading the general populace to despise them.

Relations between Zimbabwe and China have been strong as Harare continues to look East with biting sanctions from the West – the European Union and the United States.

However, due to some of the Chinese behaviour and approach in their way of doing business, the relations might be tainted by Zimbabwe who has developed abhorrence towards the Chinese doing business in the country.

Recently four Chinese nationals were attacked by artisanal miners following a misunderstanding over mining rights at Premier Estate outside Mutare on the 3rd of February. It is reported that a group of artisanal miners was working in a tunnel at a field belonging to a Mr. Zimunya when Chinese nationals from Zhong Jian Investments brought an excavator to fill the shaft, claiming that they had a permit to mine at Premier Estates. This angered the artisanal miners who summoned their colleagues working along Mutare River and they jointly attacked the Chinese nationals using an assortment of artisanal mining tools such as crowbars, picks and shovels while sparing the operator of the excavator – a Zimbabwean national. One of the Chinese men reportedly sustained three broken ribs, while another lost a finger as he tried to protect his face from a shovel attack. The condition of the other two is still unknown.

DINDE community members in Hwange are locked in a stand-off with a Chinese investor over the latter’s proposed coal exploration operations within their community, with villagers fighting to stop the operations. Villagers argue that the Chinese investors are in breach of environmental and customary laws of the country as they have not produced any documents granting them permission to work in the area nor engaged the community for a social license. The Chinese investors operating as Beifer Investments on the 5th of February 2021 moved to Dinde to start the work.

In June last year, a Chinese employer shot two workers at Reden mine in Gweru. The Zimbabwe Environmental Law Society (ZELA) at the time said, shooting of two Zimbabwean workers by the Chinese boss shows the “systematic and widespread” abuse that locals face in Chinese mining operations. The incident attracted condemnation globally as the news made headlines in global news channels.

CENTRE FOR NATURAL RESOURCE GOVERNANCE (CNRG) last year said it recorded cases of Chinese mining companies that assault employees and dismiss them from work whenever they report the assault cases to police. The organisation also reported that failure to pay workers’ salaries is now becoming part of some of the Chinese companies’ culture.

CNRG also reported a case of a Chinese national hitting a diamond worker with a hammer on the forehead in Marange and said the incident must mark a turning point where Never Again must these abuses be experienced by Zimbabweans in their own country.

Zimbabwe Miners Federation (ZMF) last year engaged the Chinese Ambassador regarding abuses of locals by some Chinese miners. In a statement, Zimbabwe’s biggest mining body said, “Zimbabwe Miners Federation (ZMF) Executive and Management Board has received numerous complaints from the artisanal and small-scale miners alleging ill-treatment and harassment at most Chinese mining operations in the country”.

According to Chrome Miners Association Chairperson Mr. Shelton Lucas, the behaviour of the Chinese towards their workers has been bad to reflect the friendship between Zimbabwe and China.

“Chinese people’s business approach in Zimbabwe is very bad in terms of their behaviour towards workers. They ill-treat people and the local communities. If livestock encroach during their mine jurisdiction they create an environment that is punitive for example exposure to cyanide waste that can wipe out the entire head. They put boom gates also in road servitudes, workers accommodation is not good and their operations don’t benefit anything to Zimbabwe’s GDP. There is no infrastructure developments and the government will be caught in between the hard surface and the hard rock because of some obligational concessions with the Chinese in form of aid this would perpetuate corporate bullying,” he said.

Norton Miners Association Chairperson, Mr Privelage Moyo said there was likely going to be a confrontation between Chinese investors and the local people a development that has negative effects on Zimbabwe-China friendship.

Moyo said the Chinese have been looting minerals from the country in the full view of citizens at the same time treating their workers shamefully, not mirroring our countries relations.

“There is likely to be a confrontation between the Chinese investor and the local people. That confrontation might affect Zimbabwe-China relations. We need to focus on business principles with fellow Chinese. Locals feel Chinese are stealing from them as they do not use proper channels of engagement and do not honour community ownership and share structure. The Chinese are also known not to respect traditional norms with some mining in sacred areas.

“The Chinese assisted us during the struggle, if they feel we have to repay, they should state the price. The Chinese feel powerful, they are not treating locals as friends. The Chinese are undermining the rights of the people, they don’t share the sentiment to what they did to us. Let’s look at each other as friends and partners and we do business that benefits everyone.” concluded Moyo.

In 2019 firebrand Norton Member of Parliament Temba Mliswa told the Epoch Times. “They [Chinese companies] don’t comply with our labour laws. They are causing environmental degradation, are violating human rights, and are involved in corruption. If Chinese investment is so good for Zimbabwe, why is the Zimbabwean economy still struggling?” Mliswa said.

“Our government has been signing deals with the Chinese, but at what cost? Some of these Chinese companies are not honest. They claim to be brick moulding when, in actual fact, they are mining gold. Our leadership is letting us down,” he said. Mliswa has vowed that “the days of Chinese companies in Zimbabwe are over,” adding, “God will command us to take back our resources.”

The Parliamentary Portfolio Chairperson on Mines and Mining Development Hon Edmond Mkaratigwa said his committee was going to engage the Minister to find a way forward to prevent a possible confrontation.

The confrontation in Mutare should not be taken lightly as can be a taste of things to come.