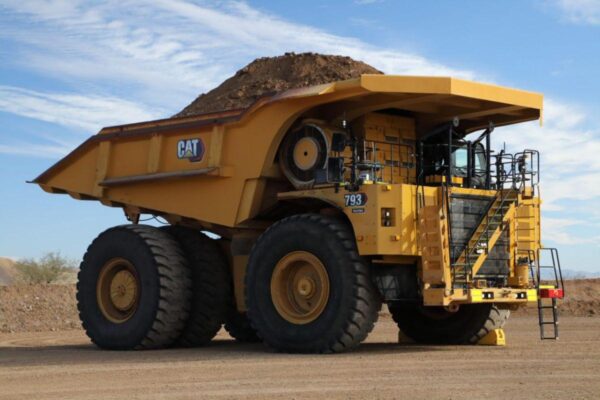 Caterpillar has staked its claim to leadership in mining sustainability with the successful demonstration of a battery-electric large mining truck at its proving grounds in Arizona – a site that will itself be the focus of major investments to incorporate sustainable operations moving forward.

The demo of a battery-electric 793 mining truck is one of numerous electric projects that Caterpillar is working on – it announced both its own battery prototype and four models of battery-electric prototypes in October. This test of the 252-ton (US) truck was part of Cat’s Early Learner program, which includes key mining customers to help accelerate development and validation of battery electric trucks.

“Our global team came together to develop this battery truck at an accelerated pace to help our customers meet their sustainability commitments,” said Resource Industries Group President Denise Johnson. “This demonstration is a significant milestone, and we are excited for these trucks to get to work at customers’ sites around the world in the near future.”

Cat’s Early Learner customers watched a live demonstration of the prototype 793 on a seven-kilometre course at the Tucson Proving Ground in Green Valley, Arizona, where it was built. The demo saw the 793, fully loaded to its rated capacity, achieve a top speed of 60 km/h (37.3 mph). It also climbed a 10 percent grade at 12 km/h (7.5 mph) for one kilometre, as well as a one-kilometre run on a 10 percent downhill grade to capture energy that would normally be lost to heat and regenerating the energy to the battery.

Tharisa to invest US$250m in Zim

Cat’s Early Learner program started in 2021 and is focused on accelerating development and validation of battery-electric trucks at participating customer sites. A key objective is collaboration – working with clients who have made commitments to reduce and eliminate greenhouse gas emissions in their operations aids in advancing developments that support the energy transition.