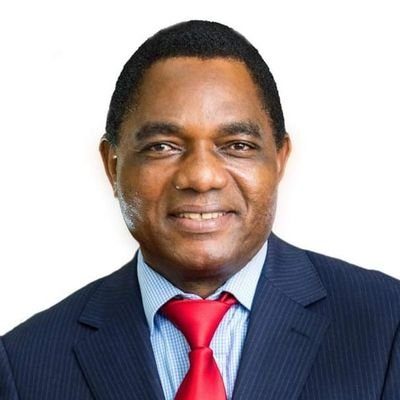 When Hakainde Hichilema first ran for President in Zambia, his background as a wealthy businessman was used against him.

“Rich people don’t understand the struggles of ordinary people,” an opponent said in the 2011 election, in which Hichilema came a distant third with 18.5% of the vote.

Since then, he worked to strip down that image of an elitist, swapping business suits for jeans and casual jackets. He carefully crafted a social media strategy that cast him as an everyday-man, and not one of Zambia’s richest men.

“I am just a cattle boy,” he told an interviewer ahead of the 2021 elections.

But, yet, it is his business background that voters now look to, as he faces the challenge of solving the economic crises he inherits from his successor, Edgar Lungu.

Here is a profile on Hichilema, and some of the key economic questions that he faces as he enters office.

He was born in 1962, in Monze, a district in the South of Zambia. He studied business at the University of Zambia and took an MBA at Britain’s University of Birmingham. He became leader of the United Party for National Development (UPND) in 2006, after the death of one of his mentors, the long-time opposition leader Anderson Mazoka.

He has now won at the sixth time of trying.

What about his business interests?

Hichilema was CEO of accountancy firm Coopers and Lybrand at 32, from 1994 to 1998, and of the company’s successor firm Grant Thornton, up to 2006.

He has chaired and held substantial shareholdings in large firms such as Barclays Zambia, and Sun International, which holds the country’s biggest tourism resorts.

He is one of the largest cattle ranchers and beef suppliers in Zambia.

He has publicly received the support of the Brenthurst Foundation, which is chaired by former Nigerian president Olusegun Obasanjo. The foundation is run by the Oppenheimer family, which has vast mining interests such as a stake in Anglo American, and will likely be key in the economy under Hichilema.

Copper: The job at hand

Copper accounts for over 70% of Zambian exports. This means that copper prices directly affect the country’s currency and inflation.

When world copper prices fell during Lungu’s term, 15,000 mineworkers lost their jobs. This sparked violent protests, in which workers blamed Lungu for failing to protect them. This was a factor in Lungu’s poor results in the Copperbelt.

Hichilema ran his campaign on promises of slowing down inflation, which has hit record highs above 25%. Since January last year, the kwacha has fallen by 40%.

The crisis in the mines has also been worsened by low tax payments from big mining companies.

Even when copper prices peaked in the early 2010s, Zambia received little from the mines. Lungu tried to fix this by raising mining royalties, but this worked against him as large mining investors protested by holding off on new investment and threatening to shut down operations.

This February, under pressure from miners, Lungu approved a lower mining royalty scheme, halving royalty rates for open-pit mines. But relations between Lungu and miners were already damaged, beyond repair.

Zambia’s state mining investment arm ZCCM-IH agreed in January to take on US$1.5 billion in debt in exchange for full control of Mopani Copper Mines. This was because Glencore, the company that owned the mine, had threatened to shut it down. Lungu said this step was good for workers, but Hichilema said it added more debt.

At one time, Zambian authorities had even detained Mopani’s CEO, Nathan Bullock, as he attempted to leave the country.

In 2019, Lungu placed Vedanta Resources’ Konkola Copper Mines in provisional liquidation, accusing Vedanta of underpaying taxes and lying about the scale of its investment. Solving this standoff will be one of the Hichilema’s key priorities.

Last year, Zambia defaulted on US$3 billion of foreign bonds. Hichilema has pledged to immediately start talks for a quick aid package from the International Monetary Fund (IMF), as he negotiates debt restructuring with other lenders.

The IMF expects Zambia to be among the countries to see slow economic recovery this year, with growth of 0.6% after a 3.5% contraction last year.

How do investors see Hichilema?

Hichilema was the pro-business candidate in the election.

Investors were rooting for Hichilema. Ahead of the poll, Kevin Daly of Aberdeen Standard Investments, part of the Zambia External Bondholder Committee, a grouping for investors holding Zambia’s Eurobonds, said a win for Hichilema would see a rally in Zambian assets.

Hichilema won more support from big business when he promised to reverse mining royalties that had been imposed by Lungu. These would have hit international groups such as Glencore, First Quantum, Barrick Gold and Vedanta.

Hichilema told Radio Christian Voice in January 2019 that miners were backing his cndidacy: “The mining companies are saying ‘HH [Hakainde Hichilema] we are waiting for you to come [into power]. We will pay the tax which you will introduce because we know it is a fair tax’.”

It is also a good time for Hichilema to be going into office.

Copper prices have since recovered, which is good news for the kwacha, and Hichilema.

Relations between Lungu and the IMF were so bad that, in 2018, he pushed for the expulsion of the IMF’s resident representative, Alfredo Baldini. But IMF was already signalling a deal for aid last year.

Zambia will also benefit from IMF SDR allocations, which will double Zambia’s foreign reserves, shore up the currency, and boost Hichilema’s efforts to turn around the economy.

“I’m a businessman; I know how to create jobs,” Hichilema told one rally.

Zambian people will be hoping that he is right.