An image with Zebra carcasses with the inscription “Happening at the Hwange National Park as the Chinese Company clear to start Coal Mining” is making rounds on various mining Whatsapp platforms.

The image is not in any way related to the current Chinese Special Grant in the Hwange National Park Zimbabwe. 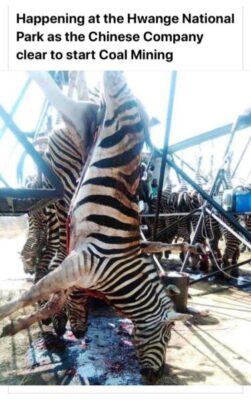 The image appears to have been shared across the border after a South African owned Hestony truck overturned near Kimberley the capital city of Northern Cape Province.

A South African company Emam Bux Meats Wholesale and Retail also became a victim of fake news after online posts suggested the Zebra meat was destined for its fridges and it was selling to unsuspecting customers for consumption.

The image comes as two Chinese companies have been granted Special Grants to extract coal in the Hwange game reserve, a move that has ignited backlash locally and internationally.

Trevor Lane, who has worked for the Bhejane Trust in Hwange for more than a decade said, “This is one of the greatest game parks in the world and the mines would be in one of the most pristine areas of the park. The last black rhino population in Hwange Park lives there, so do 10,000 elephants and 3,000 buffalo. If it goes ahead it will be an end to the park. It would kill the tourist industry which is worth hundreds of millions of dollars.”