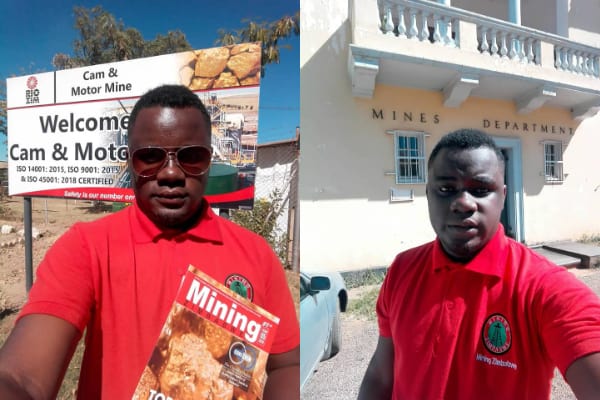 Valuation of a gold mine

As Zimbabwe currently forges ahead with the 12 billion road map decentralisation plays a critical role in attaining the milestone.

Mashonaland West being undoubtedly the richest province with over 63 minerals only has one Provincial Mining Director based in Chinhoyi, the provincial capital. All Mashonalandwest mining-related paperwork is submitted and processed at the Chinhoyi office.

In the same province is Kadoma popularly known as the city of Gold. It is undoubtedly a hub of gold mining in the country. In the vicinity of Kadoma is one of the country’s biggest gold mine and producer, RioZim owned Cam and Motor mine. The town is also much closer to Zimbabwe’s biggest platinum producer Zimplats. Kadoma is also a stone throw away from mines such as Golden Valley, Venice Mine, Pickstone Peerless, Elvington, Brompton mine, Dalny Mine, Glencain (Tolrose), Giant Mine, Kadoma Magnesite, and is home to thousands if not hundreds of thousands of small-scale miners and big names in the small-scale mining industry.

Kadoma is without a shadow of a doubt a much busier mining town than Chinhoyi currently is or will ever be. Its offices are largely underutilised for a town of such calibre.

It is much sensible for the Ministry of Mines and Mining Development offices in the City of Kadoma to be fully resourced and allocated its own Mines Director to minimize workload at the Provincial offices in Chinhoyi and minimise time-consuming long-distance travelling for miners and limit unwanted movement in these Covid-19 times.

Zimbabwe Miners Federation (ZMF) Mashonalandwest Chairman Mr Timothy Chizuzu said Kadoma is the centre of more than 80 per cent of mining activities in Mashonaland West Province, therefore, to minimize the overburden at the Chinhoyi offices, the offices in the city should be fully utilised.

“Kadoma is the centre of all mining actives in Mashwest and I think the Kadoma office should be fully resourced so that people will not have to travel for long distances to pay for inspection fees or to collect maps. More than 80% of activities are close to Kadoma,” Chizuzu said.

A chunk of the $1.4 billion allocated by the treasury towards the operations of the Mines Ministry should therefore be used to establish offices in almost every district in the country.

The Chairperson and Mineral Economist at Institute of Mining Research Mr Lyman Mlambo said decentralization of key mining services was of importance to increase the effectiveness of the Mines Ministry.

Mlambo said the area of communication in the Ministry of Mines was of significance especially in Mashonaland West province since the province has many mining players as such communication of the Ministry’s policies, information, regimes (fiscal, etc) and any changes is key.

“There are also many more mines producing other minerals like chromite, PGMs, limestone, graphite and magnesite. In terms of the total number of formal mines (for all minerals), it is second to Midlands province. The idea of decentralization of key mining services in the case especially of Mashonaland West is important, it will definitely expedite payment of fees and other charges, processing of applications for various permits and delivery of technical support by the Ministry to the industry in the province.

“Kadoma has the greatest density of mining operations among the cities in the province, including the artisanal and Small-Scale Gold mining activities. It makes sense therefore to enhance the capacity of the Ministry’s office in this city.

“Kadoma District office should be fully capacitated in all areas including title administration, inspections (increase inspectors and vehicles to increase visibility in the field), geological services (in terms of staff, maps, field equipment and vehicles), engineering (both mining and processing extension services), and legal (advisory) services.

“Also the department responsible for communication and advocacy should be strengthened.

“Where you have so many operators and players communication of the Ministry’s policies, information, regimes (fiscal, etc) and any changes become key,” Mlambo said.

According to the Deputy Chairperson of the Geological Society of Zimbabwe Mr Kennedy Mtetwa, the answer to most of the problems arising in the mining industry is the cadastral system.

The cadastral system will help miners in terms of the urgency in the application of prospecting and mining licences as the system will accept and reject applications automatically.

In terms of convenience, miners will be able to access cadastral maps and all the information of registered claims, who registered the claims and when at any given time without any hindrance or bottlenecks as happening now.

It is also going to boost government revenue because it will be easy for the government to track the miners.

“In fact, the answer to this problem is for government to install the cadastre licensing system and everything becomes digital. Miners pay their inspection fees electronically.

What is the government doing?

According to the Deputy Minister of Mines and Mining Development Hon Polite Kambamura in an endeavour to see the mining sector achieving the President’s vision for the country to become an upper-middle-income economy by 2030 through contributing to the mining roadmap where the sector is expected to fetch an annual revenue of US$12 Billion by 2023, the ministry was working on establishing sub-offices in Kadoma, Gokwe, Hwange and Zvishavane.

“We are working towards that sub-offices will be capacitated and new ones established. Targetted areas are Kadoma, Gokwe, Hwange, Zvishavane.”