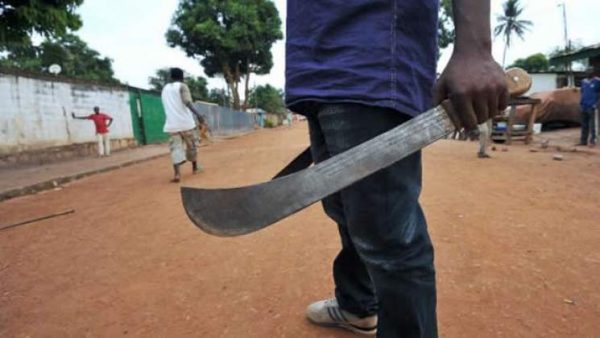 In an attempt to disarm a security guard, a 27-year-old machete-wielding criminal believed to belong to a popular group called the team Barca was shot dead at Good hope mine in Kadoma, the Zimbabwe Republic Police has said.

According to the police, the deceased was part of a 60-member gang of illegal miners who raided the mine armed with axes and knives.

The deceased according to the police was gunned down whilst trying to disarm one of the three security guards who were guarding the mine, other miners have been reportedly left the scene after the shooting incident.

“A 27-year-old man was shot dead by a security guard at a mine in Battlefields, Kadoma. The deceased was part of about 60 illegal miners who raided a mine which was being manned by 3 guards. When they were challenged to leave, the deceased, armed with an axe and a knife menacingly.

“charged towards one of the guards intending to disarm him, he was shot by one of the guards who realised that his colleague’s life was in danger. The rest of the illegal miners fled from the scene after the incident” said the police.

The police also promised to descent heavily on machete-wielding criminals.

“Violence of any form will not be tolerated and likeminded elements are warned that the wrath of the law will be severely applied,” the police said.

The Police recently issued a statement outlining that they arrested 907 at Jumbo and Mazoe river for conducting illegal mining.

The accused persons are being charged for criminal trespass, illegal possession of gold/gold ore, possession of harmful liquids/drugs and other offenses. A total of 18 vehicles were impounded while various mining equipment, an assortment of drugs and explosives were recovered.