Mount Darwin Police arrested eight machete gangs who were set to pounce on miners in the Mukaradzi area yesterday. 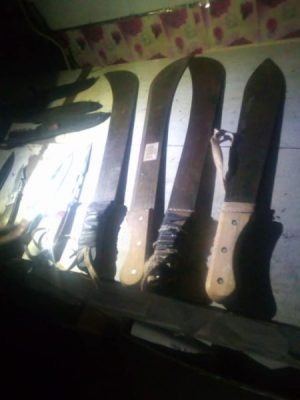 The gang was apprehended after miners in the area got suspicious seeing an unfamiliar vehicle and unfamiliar faces prompting the miners to seek Police assistance.

On arrival the Police searched the gang and four machetes, four okapi knives were discovered in the boot of a Toyota Wish vehicle they were using. On further interrogation, the gang confessed to being behind the spate of attacks in Shamva, Mazowe and behind the stabbing of soldiers in Bindura.

The modus operandi of the gangs is they are well connected in their areas of operations. They receive tip-offs of well-performing mines and gather intel such as mine owner and team members’ names. When they pounce on the target mines they have specific names and any resistance will be met with brutal attacks.

Small-scale miners in Zimbabwe hardly secure their operations and this poses a huge security risk as their claims are open walk-in areas.

Retired Chief Inspector Elia Sungiso said, “Small-scale miners should beef up their security. They should have armed guards who have training in unarmed defense patrolling their areas”. He continued, “MaShurugwi’s are not prophets, miners should stop spreading the word when their mines are excelling for their own safety”

Machete-wielding gang attacks are in the spotlight after the brutal murder of a 27-year-old Kadoma Police Constable Wonder Hokoyo.  Authorities have promised to crack down on the marauding machete-wielding criminals who are a menace to the society with the Justice Minister breathing fire. The minister has suggested the Police shoot to kill the gangs as they are no different from terrorists. Some miners support the move as a necessary evil to restore sanity in the ASM Industry as its slowly spreading into residential areas.