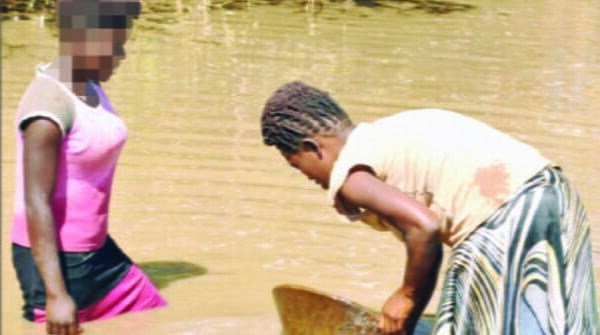 WITH pans and shovels in their hands, children, some not yet 15 years old, wash the muddy contents and look through heaps of soil and sand that has been removed from part of Mutevekwi River in an attempt to extract gold.

They do not have any real equipment or protection.

Submerged knee-deep in the now dirty river, the boys 12, 14 and 15-year-old risk sliding and drowning.

The three pupils (names withdrawn) who learn at Musasa Primary School in the area are part of scores of women gold panners who have invaded this part of the river which is between Ward 18 and 19 in Shurugwi.

The panners are taking advantage of distillation process that is being done by an Indian Mining Company ENR- Zimbabwe.

ENR is one of the three companies that were granted special grants by the Government to do pilot alluvial gold mining for the next six months in the area.

The other two companies are doing the same in Save River that divides Manicaland and Masvingo provinces and Angwa river in Mashonaland West province.

For the past three months the children gold panners, working with their mothers or other female relatives have been taking advantage of ENR-Zimbabwe excavators which remove sand and mud from the river.

The company is carrying out operations legally, but people come to the area to search for gold illegally.

Gold panning is the cheapest method or tool (and oldest method of mining gold) of mining to extract gold from gold placer deposits which occur in river or stream beds.

A 14-year-old boy who is in the company of his aunt said he spends over seven hours a day in the water doing the tiresome process.

“I am a gold panner together with my friends and relatives. We have been doing this for the past three months since this company started scooping sand and mud to the river bed. So, we take advantage of the loose soils and pan using the water from the river,” he said.

He said he wishes he was raising money for fees but alas — the money was going towards food and their general upkeep.

“Mostly aunt buys food with the money. When we sell the gold to the gold buyers, she collects it and does what she wants. I hope she is keeping some for school fees,” he said.

Another boy aged 13 said it’s not an easy job as there is a possibility of slipping and drowning since the water level sometimes rises.

“We have no protective clothing, sometimes we just pee in the river since getting out is time consuming. Panning is tiresome but we are now getting used to the hustle. One works the pan, that is shaking it in a circular manner so that the gold goes to the bottom. The other will be collecting the sand, soil from the heaps of soil on the river bank or some metres away
from the river which have been put there by excavators. So, one cannot work on it alone. We have to be in pairs,” he said.

His aunt identified only as Miriam said they wake up at 4am and using torches for lighting, start panning before ENR employees come to the river.

“We have been playing a cat and mouse game. ENR employees do not want us in the river.

They accuse us of causing siltation. So, we normally wake up very early so that by 8 am when they start work, we would have worked a bit and disappeared,” said Miriam.

So, what changed today because it’s 10 am and they are still panning?

“It’s because we heard there is a meeting and they won’t be concerned about us, so we have to take advantage,” she said.

“For an ounce of gold we are paid US$4 imagine that it has to be shared between two people because we work in pairs. That’s US$2 per person which comes after two to three days. It’s not easy.”

He said there was a lot of siltation in the river because of uncontrolled gold panning.

“What is happening here is distillation of Mutevekwi River by this company following years of siltation. At the same time, we have realised that gold panners have invaded the area taking advantage of heaps of sand and soil that is being removed from the river.

Gold panning is illegal and the use of children in panning is also illegal. This mining company was given a special grant to practice river bed mining and the gold panners must not be allowed to operate as they are the main cause of siltation of the river,” said Mr

He said there is a lot of siltation in the river because of uncontrolled gold panning.

He said even the Constitution of the country is against child labour.

Section 19 of the Constitution of Zimbabwe provides that the State must take appropriate legislative and other measures to ensure that children are not required or permitted to perform work or provide services that are inappropriate for the children’s age or place at
risk the children’s wellbeing, education, physical or mental health.

“The company working on that part of the river is doing it legally and it is therefore, illegal that these women and children are practising gold panning. If they are caught, they will be arrested. The Constitution of the country, the labour laws speak against child labour. So, such a practice is criminal. The children should be at home or school,” he said.

In terms of the Children’s Act Chapter 506, no parent or guardian of a child or young person shall permit such a person to engage in child labour.