The mining industry has been hit by an acute shortage of capped fuses. The industry is screaming. The few suppliers who still have the product have doubled their pricing from an average of $1.80 to a minimum of $3.50. The most affected are the small scale miners who have remained stuck with the safety fuse despite their counterparts, the large scale miners having moved over to the cheaper and more effective products on the market.

Why the small-scale mining industry still relying on the safety fuse system when it is inherently unsafe and better alternatives are available on the market still remains a mystery. Why we are still importing a product all the way from Peru and yet they are alternatives being manufactured locally and in the region again boggles the mind. For the experts in the field of explosives engineering, this shortage is a golden opportunity to start robust and candid discussions around the use of safety fuse.

Other countries such as South Africa, have gone a step further and banned the use of the safety fuse in favour of modern products such as the shock tube. The product found on the market is imported all the way from South America because major explosives suppliers locally have stopped manufacturing and closed their local plants.

The Capped Fuse system has commendably served the mining industry for well over 120 years. Invented in the 19th century by William Bickford, an English rope maker, the fuse replaced earlier and less reliable methods of initiating Gun Powder which had caused many accidents in the mining industry. With time, newer and better initiation methods such as the electric detonators, electronic detonators, detonating cord and shock tube (invented by a Swedish Scientist Per Anders Person) have emerged replacing the capped fuse system in many mining operations.

Looking at the array of available initiation systems, the shock tube is touted as the best alternative to the caped fuse. To the Explosives Engineer, a choice between the capped fuse and shock tube is a case of simplicity vs safety, cost-effectiveness and efficiency. The caped fuse is simple to use and the knowledge of using them has been passed from generation to generation of Makorokoza (as the small scale miners are referred to). There is an insatiable demand for the capped fuse and cartridge combination on small scale miners market.

On the other hand, the shock tube is safer to use, reliable, cheaper (40% cheaper) and gives better results compared to the fuse. The downside of the shock tube is that it is not as simple to tie up. Again, when they were first introduced to the mining industry, Shock Tubes were considered to be a superior product and therefore priced at a premium. Now because of their widespread use and the increase in the number of plants manufacturing the product, their prices have gone down and hence considered to be the cost-effective alternative to the fuse.

Despite all these benefits and widespread acceptance in the large scale mines, to the small-scale players in Zimbabwe, the safety fuse still remains a dictator, eclipsing the shock tube and other initiation systems. It is not a secret that the small scale mining industry has historically been extremely conservative and it has been difficult to bring miners to experiment with technology. The reasons for this technophobia are many and varied, one can spend the whole day pointing fingers. But the 21st century dictates its terms and to stay afloat, traditional mines need radical changes. The miners need to embrace newer technologies to remain competitive.

To stimulate the Miner’s appetite, here is a brief discussion on how the two systems work. 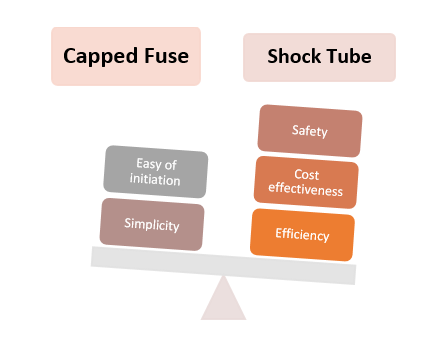 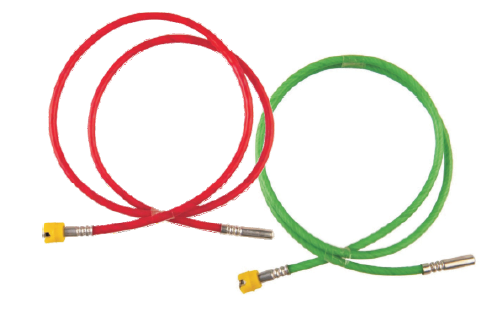 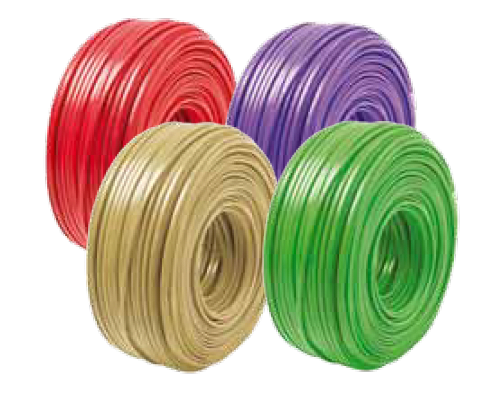 The igniter cord is a flexible cord-like, incendiary comprising of a copper wire core and covered with a plasticised incendiary composition and waterproofed with a thin layer of polyethylene. An open flame (from a match or lighter) sets the igniter cord alight and the open flame travels to the capped fuse. The detonator end of the capped fuse then initiates the cartridge or fracture explosives.

The shortcomings associated with the capped fuse system are: Igniter cord is impact sensitive, it is inaccurate causing misfires and out of sequence firing, it produces large quantities of noxious fumes, it introduces fire hazards (due to the open flame) and the system is not 100% waterproof. 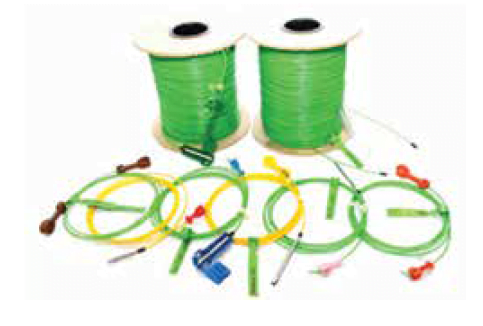 The Shock Tube (Nonel system) is a narrow bore hollow plastic tube containing a light dusting of an explosive mixture of HMX and Aluminium powders at a core load of 15mg/m. HMX is a powdered high explosive developed by the British military and mixed with paint grade fine aluminum as a sensitizer.

The Shock Tube system is highly insensitive to initiation by heat or impact and requires an intense, high-impulse shock to initiate the reaction. Shock-tube systems use a small detonation in an almost empty plastic tube to transmit the initiation signal at approximately 2000m/s throughout the blast pattern. The plastic Shock Tube is composed of one or more layers of plastic, which are designed to enhance the tensile strength and abrasive resistance of the tubing.

Many shock-tube system configurations are available from most explosive manufacturers. Hole-to-hole and row-to-row timing can be introduced by using a combination of surface and in-hole units or a combination of dual-delay detonators with both an in-hole delay and a surface delay on the same unit.

With proper training and product support from the suppliers and experts in the field, the Miners are set to benefit through the reduction in the cost of initiation systems, reduction in the amount of noxious gases produced as the fuses burn and better product performance.

Calls for genuine improvements in mine safety being made by Governments and the Mining Industry, and the widespread acceptance of the Shock tube system have seen major manufacturers of the Capped fuse system gradually phasing out the product focussing more on the newer technology. This leaves out the industry laggards having to rely more on small-time players in the far East and Western hemisphere who cannot guarantee consistent supplies into the future.

The safety fuse has served the mining industry well and still remains a hero that deserves a “mausoleum” (in an Explosives heroes acre of course), but perhaps like other icons, this is the time to hand over power to the younger generation of initiation systems. Our Miners need to be educated on the alternative technological options available so that they can make informed and profitable decisions. The time to act is NOW.

For more information on explosives please contact Moshen Jena on 0782504066