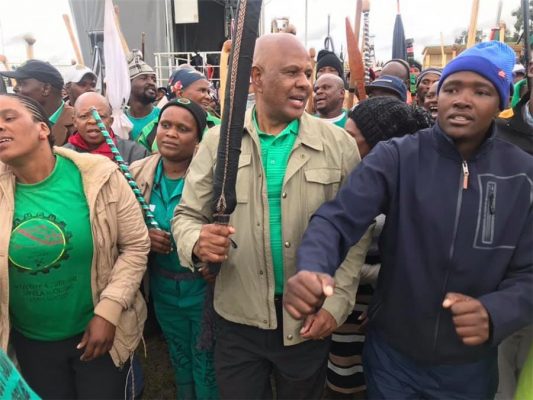 One of the most polarizing figures in South African mining, union leader Joseph Mathunjwa, has never hesitated to go head-to-head with powerful CEOs. Now he may have to face down the government.

Mathunjwa’s Association of Mineworkers and Construction Union has upended labor relations in the local mining sector, leading long and crippling strikes as it seized members from a politically connected rival. A relative upstart, the militant union became a household name after a 2012 dispute at Lonmin Plc that culminated in police massacring 34 people at a protest.

AMCU may now face its biggest test yet, after a government official threatened to deregister the union for failing to hold a regular congress and leadership polls

AMCU may now face its biggest test yet, after a government official threatened to deregister the union for failing to hold a regular congress and leadership polls. Mathunjwa has promised to fight the move, which could sharply curb the group’s finances and influence, and insisted it is compliant with regulations.

If a weakened AMCU resulted in fewer prolonged strikes at South African mines, it would be welcome news for producers already struggling with high costs and aging mines. The union was on the back foot even before the deregistration news, after calling off a five-month strike at Sibanye’s gold mines with little to show for it.

For now, though, a dispute with the Labor Department will probably mean more operational disruptions if AMCU members protest against the move to deregister the union. It also ratchets up uncertainty just as the world’s biggest platinum producers are getting ready to negotiate new wage agreements with local labor groups.

“Companies have to decide whether to take AMCU seriously,” said Ross Harvey, a mining analyst at the South African Institute of International Affairs. “If they don’t, then AMCU could unleash chaos and the mines may have to close shafts.”

AMCU is not going down without a fight. While it’s prepared to meet the labor registrar this week, the union has also referred the matter to its legal team. It has already told the official it will hold its congress in September, Mathunjwa said, blaming the latest delay on the recent strike and pointing to an unnamed “political agenda” behind the deregistration move.

AMCU was formally registered as a union in 2001 but rose to prominence after a strike by rock drillers at Lonmin Plc’s Marikana operations in 2012. One of Mathunjwa’s rallying cries has been that the National Union of Mineworkers — the group co-founded by President Cyril Ramaphosa — is too close to both mining companies and South African authorities.

In 2013, AMCU dethroned the NUM as the biggest labor group at the country’s platinum mines and a year later led a five-month strike, the longest ever in the sector.

The relationship between the two unions has been marked by regular violence, with each blaming the other’s members for shootings and murders. Most recently, at least nine people died during the strike at Sibanye Gold Ltd. that was called off earlier this month.

If AMCU were deregistered, mining companies could move to cancel collective-bargaining arrangements and potentially withdraw its rights to collect union dues, said Brett Abraham, a lawyer at Webber Wentzel specializing in employment law. It wouldn’t prevent AMCU members from continuing to organize collectively and embark on legal strikes, he said.

The union has 60 days to make submissions to Registrar of Labour Relations Lehlohonolo Molefe on why it shouldn’t be deregistered.

It’s unlikely that the authorities will go as far as deregistration, said Albert De Beer, a labor consultant. Still, it’s clear that the union has been weakened by recent setbacks, he said.

“It would be a disaster for the platinum industry if AMCU is deregistered,” said Bernard Swanepoel, a veteran of South African mining who now sits on Impala Platinum Holdings Ltd.’s board. “In my opinion, a ‘cleaned-up’ and well-governed AMCU is the most likely — and best — outcome.”_Bloomberg News