ZCDC has fired seven executives with immediate effect. This move comes after serious accusations of corruption and mismanagement of resources.

This move will likely get applause from Zimbabwe as it will be seen as a step in the right direction to curb mismanagement that is rampant in the mining industry.

The Press release is contained in the document below:- 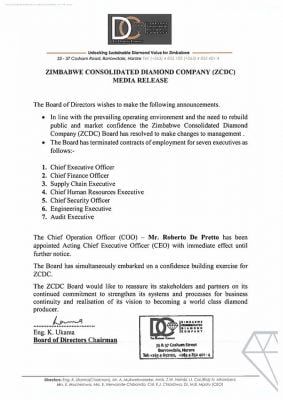 Zimbabwe Consolidated Diamond Company (Pvt) Ltd (ZCDC) is a diamond mining company wholly owned by the Government of Zimbabwe. The Company has mining operations in Manicaland in Mutare’ s Chiadzwa area and in Chimanimani.

The Company is conducting exploration and resource evaluation programs across Zimbabwe and expects to open new mines in other parts of the country soon.

ZCDC was issued with Special Grants 6026 and 6460 which vests mineral rights to carry out mining operations for diamonds in Chiadzwa and Chimanimani respectively.