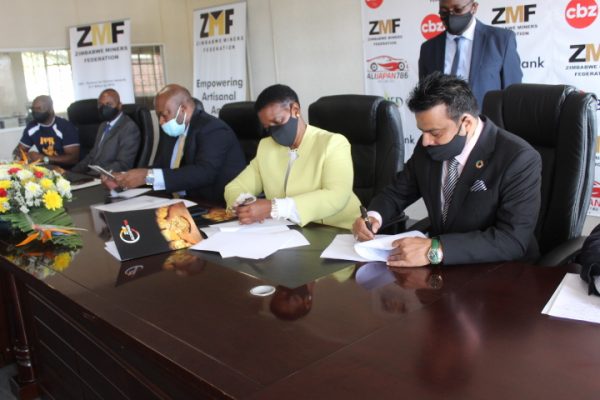 As part of its formalisation exercise, the Federation has partnered with these firms for them to fill in the logistics gaps for small scale and artisanal miners to ensure that mining growth and development happens. The partnerships will cover, gold buying, fuel scheme for small scale miners, vehicle loan scheme, and mining mechanisation programs.

According to ZMF President Ms Henrietta Rushwaya, the Federation body of small scale and artisanal miners has committed themselves to make sure that ASM aid the Minister’s vision for the mining sector achieving a USD12 billion industry by 2023.

“As the Zimbabwe Miners Federation, we take note of the work the ministry is doing, we have taken it upon ourselves that the 12 billion road map is attained,” Rushwaya said

The Federation according to Rushwaya will enter into a tripartite agreement with an investor identified as a partner to buy gold from the artisanal and small-scale miners and CBZ, the Federation has identified 4 districts where gold buying offices will be set up and commissioned.

“As part of our formalization exercise, we have incorporated CBZ as our banking partner, we have our small-scale miners who work hard to ensure that Zimbabwe develops.”

“ZMF will acquire gold buying permits, identify agents, and set up gold buying offices for all the mining districts. Cash will be accessed from CBZ branches. Personnel at all the ZMF gold buying centres will hand over any bullion transacted equivalent to cash disbursed to CBZ-ZMF vaults for transit to Harare.’’ She said.

Rushwaya also said that ZMF as a registered gold buyer will help in curbing leakages by buying gold in even the remotest areas. The association will buy as little as a point of gold which is shunned by other buyers.

“Allow us to help in the gold mobilisation exercise, as such we have taken it upon ourselves as ZMF that we try to reach to all areas that fidelity has not been able to reach, we can collect as little as one point of gold. One point collected from as many as 2000 miners can be of significance to the national fiscus,” said Rushwaya.

“We do not take for granted the opportunity that we have been given to be your partners. As CBZ, we see this as the beginning of a long-standing relationship.  When we look at our group, we are structured in a way that when miners have the fuel, when you are being paid your cash, we will then look at the next stages of your life. As Zimbabweans, we should be asking ourselves, until when are our small-scale miners going to be seen at the bottom end of society when they generate over a billion USD dollars every year. So we would want you to start generating wealth for your future families,” said Nyazema.

“ZMF shall be using CMED facilities dotted around the country to supply fuel to its members. The fuel will be dispensed from CMED fuel depots around the country. CMED will print coupons uniquely marked with ZMF logos. These will be sold from designated ZMF offices/agents”

ZMF General Council Chairperson Makumba Nyenje has confirmed that at least 200 vehicles including mining equipment from Alijapan in the country are expected in the country before this December.

The payment will either be in hard currency or gold as per contractual terms.