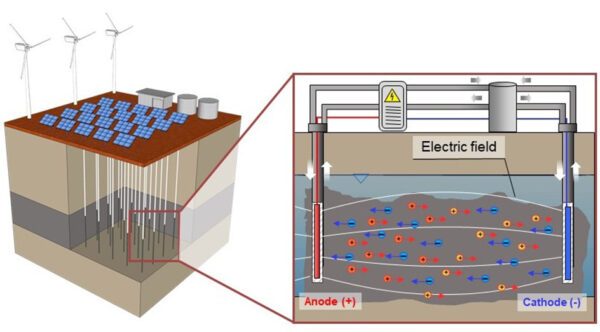 Researchers from The University of Western Australia, Australia’s national science agency CSIRO, the Technical University of Denmark and the University of Exeter have developed a new mining technique that uses electric fields to extract metals from hard rock ore.

The technique could replace the traditional method of digging which results in significant costs to the environment.

Digging methods are currently used in 99 per cent of mining activity, often resulting in significant environmental degradation and huge quantities of solid waste.

Global estimates of waste are of the order of 100 gigatonnes per year, significantly larger than any other form of waste generated by humans.

The new technique is published in Science Advances. It is now being further developed and refined with support from the Minerals Research Institute of Western Australia.

Professor Henning Prommer from UWA’s School of Earth Sciences and CSIRO said the technique worked by installing electrodes within the ore body and applying electric currents that could induce the transport of electrically charged metals such as copper through rocks by a process called electromigration.

“The metals are extracted within the ore body, instead of the traditional means of having to dig them out and milling huge amounts of material, a technique which traditionally has placed huge pressure on the environment,” Professor Prommer said.

“Traditional methods of excavating ore material result in a large amount of solid waste brought to the Earth’s surface which needs to be disposed of, whereas this new method dramatically decreases wastage”.

“It will not only improve mining outcomes, it will help us shift towards a more sustainable way of mining,” Professor Fourie said.

The researchers have tested the technique in laboratory experiments and through computer modelling.

After successfully extracting copper from some very tight rock samples they are confident the idea will also work in the field, not only for copper but also for a wide range of other metals.

“This is really exciting because we can use intermittent power sources such as solar and wind to extract minerals,” Professor Prommer said.