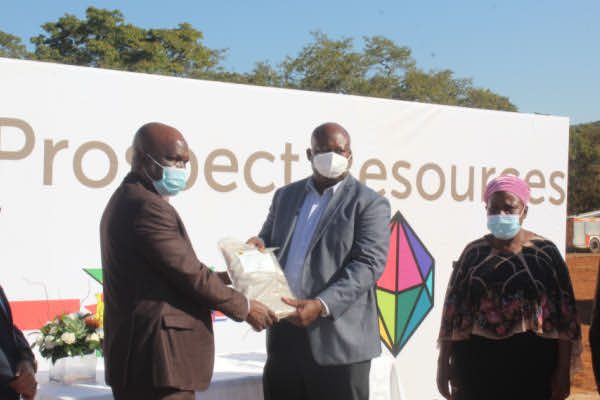 Speaking at the commission of the Arcadia lithium plant and handover of the first production to the company’s offtaker SinoMine, Prospect Resources Executive Director Mr Paul Chimbodza said the company was now confident that it has the capacity to produce what the lithium market wants making it possible for the mine to build a bigger commercial plant in the next two years.

“This pilot plant you can consider it as a proof concept where we are now very confident that we can produce the quality product that the market wants.

“It also gives confidence to our funding efforts and we hope to reach financial closure very soon that allows us to build a bigger commercial plant.

“In the next two years, we should be building a plant that is 40 times bigger than this,” Chimbodza said.

According to Chimbodza Arcadia lithium project is Prospect Resources’ flagship project and is globally ranked in the top 10 hard rock deposits with the potential to become the 8th producing lithium mine in this world.

The company has taken this project from exploration through discovery and all the way through to a definitive feasibility study focusing on high certainty and low-risk operational assumptions resulting in the company’s total expenditure including the pilot plant reaching US$18.5 Million.

Prospect believes that the production and handover of its first petalite product to its offtake partner, shareholder, and investor SinoMine is a major milestone in the development of the Arcadia mine making it possible for the company to produce and ship hundreds of tonnes of on-spec product for both Sinomine and Sibelco.

The Arcadia mine is in a unique global competitive advantage in that it is one of the few global producers of technical grade, ultra-low iron petalite (0.05% Fe203) and when in full commercial production the company will be one of the largest producers of such in-spec product.

Prospect Resources Limited (ASX: PSC, FRA:5E8) is a battery minerals company with a focus on lithium in and around Zimbabwe, with the flagship project being the 70% owned Arcadia Lithium project, located on the outskirts of Harare in Zimbabwe.