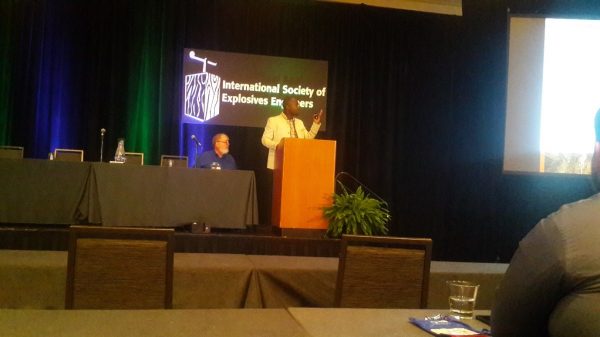 The conference brings together blasters, engineers, manufactures, researchers, academia, government officials and industry leaders. A total of 90 papers were presented during the Technical sessions showcasing the latest technological advances in the field of explosives engineering. The conference provides a forum for the discussion of practical and technical information as well as presentation of the latest discoveries in the commercial explosives industry worldwide.

Moshen presented a paper entitled ‘The application of underground bulk explosives in polyethylene pipes for perimeter control’. The paper was basically a case study of the system for a period of four years at a platinum mine in Zimbabwe where the system has been successfully implemented. The paper was presented on the 30th of January in session 7-Underground blasting.

The effectiveness of this method was evaluated using information obtained during routine blast audits and data supplied by the mines on half cast factors, over break and under break as well as analysis of data from Ground Penetrating Radar (GPR) Scans over a period of four years.

This method of perimeter control, has given the platinum miners in Zimbabwe a competitive edge in cost effective perimeter charging and blasting by simplifying the previously costly deployment of traditional barrels and other decoupled cartridges. The method has been adopted by all the platinum mines in Zimbabwe as it has proven to be a cost effective alternative of controlling the perimeter walls, along with other key benefits that relate to safety, productivity and effectiveness.

It was battle royal, as the young Engineer who turned 34 in January, shared the stage with other veteran international presenters from all over the world. When his time came, Moshen dazzled the attendees with his eloquence, expressiveness and knowledge of blasting science.

Moshen Jena went to St Faith High School in Rusape for his secondary education and studied Mining Engineering at the university of Zimbabwe. Currently he works for AEL Mining Services, a leading explosives manufacturing company as an Explosives Engineer.

Other notable presentations were from the opening Speaker and astronaut Mike Mullane who delivered a powerful message on an employee’s role in keeping themselves and their teams safe in hazardous environments during his talk entitled, “Countdown to Safety.” He used the space shuttle Challenger disaster to define this term, its safety consequences and how individuals and teams can defend themselves from the phenomenon. Ryan Brogden, a Principal Inspector of Explosives for the Department of Natuaral Resources and Mines in Queensland, Australia who also presented learnings from the Ammonium Nitrate Vehicle explosion that occurred at Angellara Creek. He was the lead investigator into the Angellara Creek Ammonium Nitrate vehicle explosion and now leads the National Working Party implementing the recommendations from the incident.

Besides the Technical papers that were presented, the attendees were taken through training on different technological advances in explosives and blasting industry and also had an opportunity to see exhibitions from the leading manufacturers and service providers in the explosives industry. In summary, the conference was indeed an opportunity to learn, connect and exchange experiences from the different parts of the world.